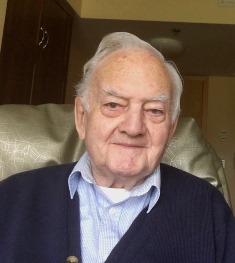 Passed away peacefully at the Colville Manor (nursing home) in Souris, PEI, on Sept. 22, 2021 at the age of 91, Mr. Harold (“Hal”) Austin Murray, formerly of Campbellton NB.
He was pre-deceased by his wife Faye (Ferguson) and sister Shirley (Prichard).
Born in Campbellton on June 18, 1930, he was the son of the late Bernie and Auley Murray.
Hal spent most of his career as an officer in the Royal Canadian Air Force (RCAF). After his retirement in 1975 he continued working in the civilian sector of the Canadian Forces until 1990 when he retired to his hometown of Campbellton.
Hal was an avid fisherman, hunter, gardener, and birdwatcher. He loved his family most of all and was very proud of his four grandchildren and great-grandson.
He is survived by his son Ken (Wendy) of Saint John, NB, and his daughter Deborah of Morell, PEI; his grandchildren: Matthew, Amanda, Leah, Tim; his great-grandson Reid; his sister, Marjorie McCorquodale, of Chesley, Ont., as well as many nieces and nephews.
The family would like to thank the staff of Colville Manor for the love and exceptional care they extended to Hal.
A memorial service will be announced at a later date and coordinated through Maher’s Funeral Home, Campbellton.