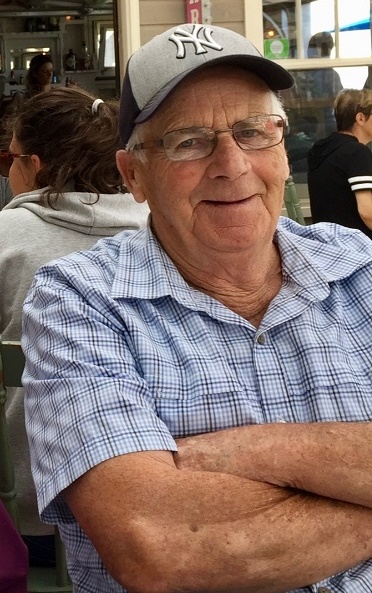 The death occurred peacefully on January 19, 2022 at the Souris Hospital of Raymond Leonard Wilson of St. Peter’s Bay, in his 80th year.  Beloved husband of Bernadette (nee MacKinnon); father to Kathy (Kevin MacEwen), of St. Peter’s Bay,  PE, Allan (Judy) of Ottawa ON and Karen (Nick MacDonald), of Petawawa ON; loving grandfather to Geoffrey MacEwen, Laura MacEwen (Logan Rafuse) and Macy MacDonald.  Also survived by his sister Irma Barrett, of Rowley MA; as well as numerous nieces and nephews.  Predeceased by his parents, John and Irene (Whitty) Wilson; brothers, Henry, Louis, and John (Clara); and by his sister, Joan.  Resting at North Shore Funeral Home, Morell.  Due to covid restrictions there will be no visitation or funeral mass at this time.  A memorial mass will be held at a later date.  Interment will take place on Monday, January 24, 2022 at St. Peter’s Bay Roman Catholic Cemetery, St. Peter’s Bay at 3:00 p.m.  In lieu of flowers, memorial donations in Raymond’s memory may be made either directly or by e-transfer to northshorefuneralhome@gmail.com to Souris Home Care or to Souris Palliative Care.  Online condolences may be made to www.northshorefuneralhome.ca   The family wishes to thank Souris home care, palliative care, nurses and Drs. Shea, Malone and Corbet, for their wonderful care shown to Raymond over the last six months.
Send a condolence